Domènech’s training was pervaded by the same spirit of erudition that characterised his surroundings, from his early days at Galavotti school in Barcelona to his period at university in Barcelona and Madrid where he studied Exact Sciences and Architecture and tried unsuccessfully to obtain a fellowship to the Spanish Academy in Rome.
At the Guillem Lluís Galavotti school on Carrer Nou de Sant Francesc, on the corner with Carrer Escudellers, near the family home and his father’s bookbinding workshop, he carried out his primary studies up until the year 1860-1861.

At the age of twelve he began his secondary education, which he completed the academic year 1865-1866, when he obtained his Baccalaureate in Arts from the Institute of Barcelona. The Galavotti school offered him a job as a private teacher to the children of middle-class Barcelona families who wanted to avoid the throngs of students attending the Instituto, or Secondary School of the Province of Barcelona, linked to the University of Barcelona. Thanks to the quality of its members of staff, Llorens i Barba, Rubió i Ors, Antoni Estalella and Coll i Vehí among them, the Galavotti school was quite prestigious. Its teachers combined their classes at university with those they gave on the baccalaureate level, and prepared students for entering the Instituto.

In such an erudite environment, the best marks in Domènech’s academic record were for Descriptive Geometry, General History and History of Spain. During those years he also enrolled in subjects such as Application Drawing at the Fine Arts School, housed in the same building as the Institute, although he didn’t manage to complete his specialisation.

Once he had finished his secondary studies, at the age of seventeen he entered the University of Barcelona to study Exact Sciences. The university had been established at the former Convent of Carme in 1842, after the disappearance of the University of Cervera. Despite the fact that the structure was in a ruinous condition, the move to the building designed by Elies Rogent was not made until 1872. Domènech took various subjects up until the years 1866-1869, and in 1870 obtained his degree in Exact Sciences. The fact that he obtained his degree a year after having completed his studies is explained by the fact that during the 1869-1770 academic course Domènech began his studies at the new and long-demanded Barcelona School of Architecture. Before then, a degree in Architecture in Spain could only be obtained at the Madrid School of Architecture. There had been several previous attempts in Barcelona to teach the discipline: from the Llotja School founded in 1775 by the Barcelona Board of Trade, to the architecture classes imparted by Antoni Celles in 1817 following the guidelines of the Academy of Arts of San Fernando, that in 1850 became the Provincial Fine Arts Academy of Barcelona, although it was only able to issue a Master Builder’s degree. Consequently, most Catalan architects began by training as master builders in Barcelona and subsequently moved to Madrid to complete their studies and obtain a degree in Architecture. Yet Domènech decided not to sit all the exams, probably due to the uncertainty of the School of Barcelona at the time, that wasn’t able to issue official degrees until 1875.

Even though Domènech had begun his architectural studies in Barcelona, the academic year 1870-1871 he enrolled at the Higher Special School of Engineering in Madrid. A few subjects he had already taken were recognised, he passed his entry exam and besides enrolling in the first-course subjects he chose a few from the Science Faculty in Madrid.

For unknown reasons, he didn’t pass any subject and the following year he changed his professional orientation and resumed his architectural studies, joining the Special Architecture School in Madrid. We must bear in mind that these were the tumultuous years in which freedom of teaching was introduced with the Moyano Law, the first Law of Public Instruction passed in Spain. University curricula would be continuously revised, and students allowed both to choose their own programmes without necessarily follow a pre-established itinerary and to sit exams without having taken the lessons. Many administrative documents concerning the recognition of Domènech’s varied studies, from secondary school to university, have been preserved. Domènech eventually graduated as an architect on 13 December 1873, before his twenty-fourth birthday. What he learnt at the school in Madrid influenced works produced during the early years of his professional practice, not only as a result of his use of elements from Mudejar and Castilian art (both in his architecture and in his graphic art) but especially in the recovery of historical styles to create a language of his own, a national architecture.

Once he completed his studies he remained in Madrid, and prepared for the scholarship to the Spanish Academy of Fine Arts in Rome. The academy awarded a three-year scholarship abroad: minimum one year in Rome, minimum and the rest travelling to other countries. Domènech sat the first two exams and obtained the highest marks in both, yet his father’s death in August 1874 obliged him to return to Barcelona to help his family’s bookbinding business and he was unable to complete his exams.

Besides obtaining his university degree, over the years Domènech undertook lifelong learning to complement and enhance his knowledge and qualifications. His private library, with a vast collection of titles, had three conceptual pillars – books on the history of art and architecture, technical books, and treatises or theoretical essays on architecture – but it also included volumes on heraldry, vessels, mediaeval weapons, agricultural irrigation techniques, travel guides, exhibition catalogues, literature, among a range of other subjects. The library contains works in Catalan, Spanish, German, French, English and a few other European languages.

The first group, books on art history and the history of architecture, included publications by French mediaevalist Jean-Auguste Brutails dedicated to Romanesque art in Roussillon, which inspired Domènech’s own studies of this architectural style, and histories of art written by Georges Perrot, Marcel Dieulafoy, Charles Victor Daremberg and other authors. It also included the volumes by Viollet-le-Duc that exerted such an influence on Catalan architects of the period. Books on Japonisme, French and German manuals on Persian, Greek, Roman, Arab and Baroque art, and the wonderful collection of Gowans & Gray art books entitled ‘The Masterpieces’, which would subsequently inspire Montaner y Simón publishers in Barcelona, were some of the library’s treasures. The connections between these elementary texts and the work carried out by Domènech as director and author of Historia general del arte for Montaner y Simón are plain to see.

The library contained a number of technical volumes for professional architects that taught Domènech useful constructional and typological innovations. In this sense, for instance, he cited several books in German, English and Spanish on hospital design typologies as the source of his ideas for the future Sant Pau Hospital in Barcelona. These technical and scientific treatises can be divided into three groups: building and graphic representation (stereotomy, topography, construction), calculation and design of structures, and architectural utilities (acoustics, applied optics, electricity, lighting, etc.).

Last but not least, the section devoted to theoretical essays on architecture contained volumes by Viollet-le-Duc, Jean-Nicolas-Louis Durand and Hippolyte Taine, whose work could have well exerted an influence on Domènech’s thesis published in the article ‘En busca de una arquitectura nacional’.

Domènech’s private library, or what remains of it, is currently housed in the College of Architects of Catalonia (COAC) bequeathed by his family. 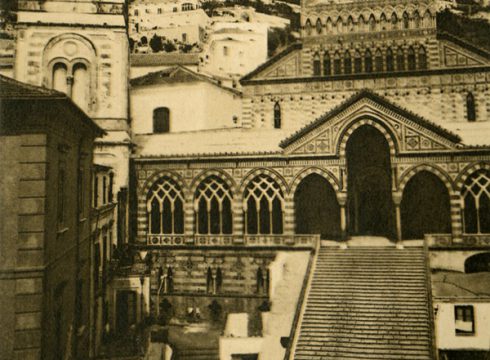 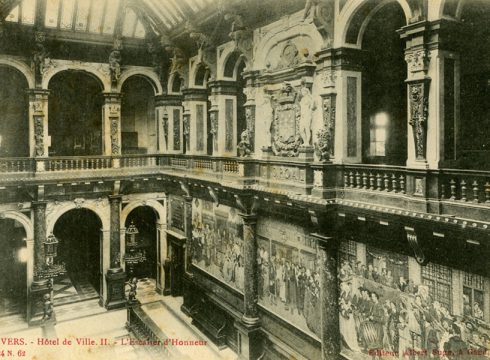 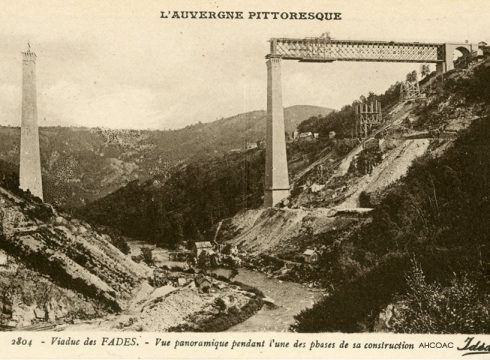 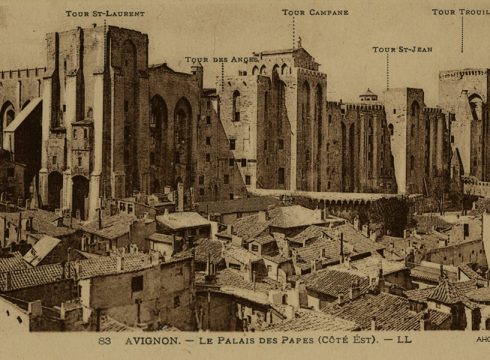 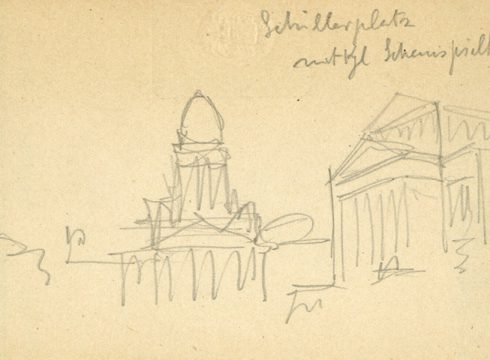 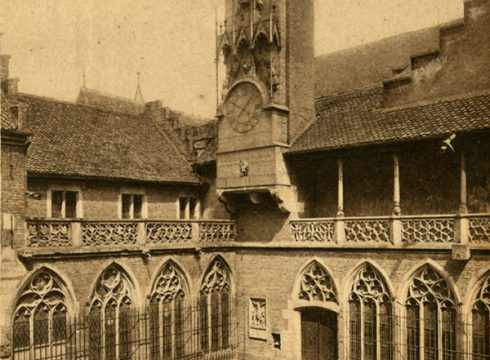 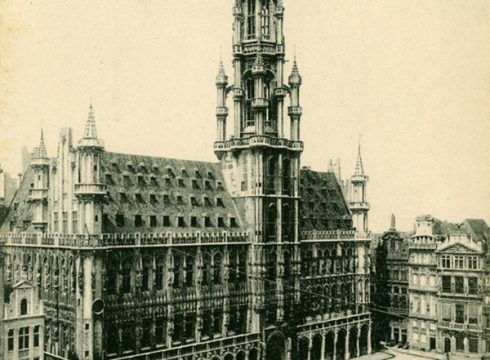 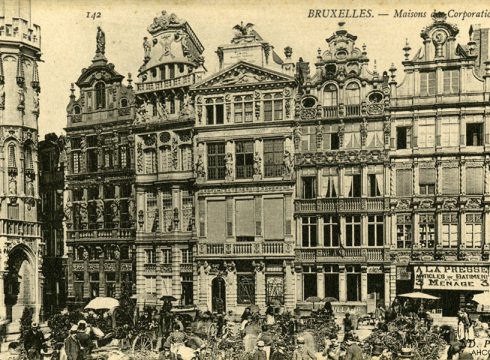 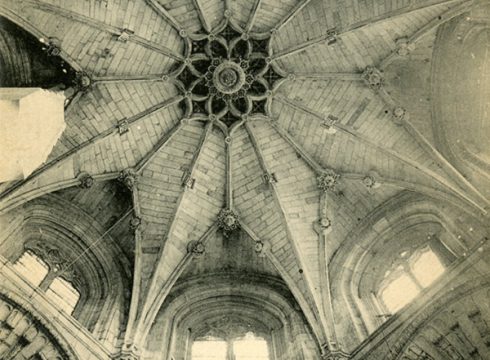 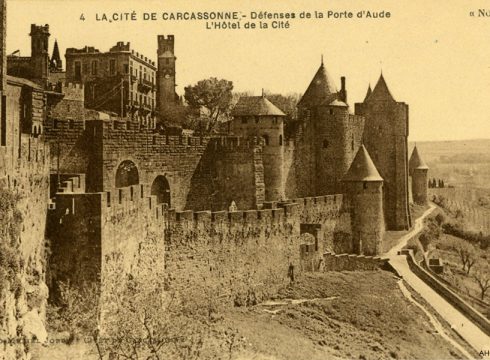 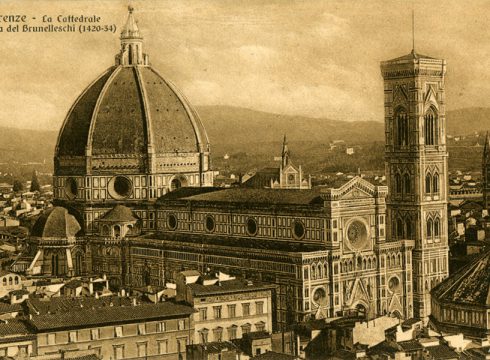 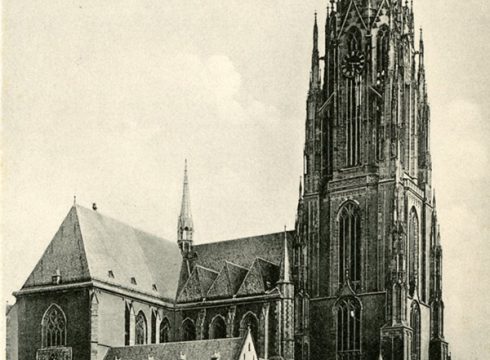 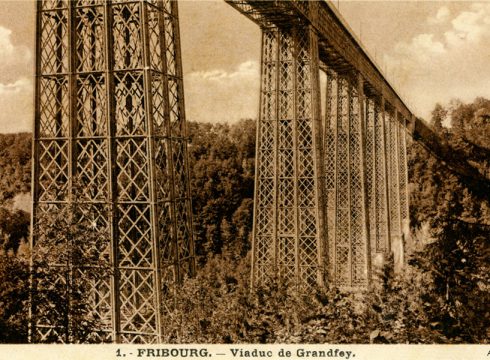 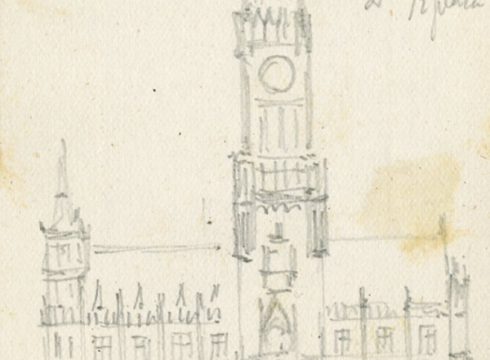 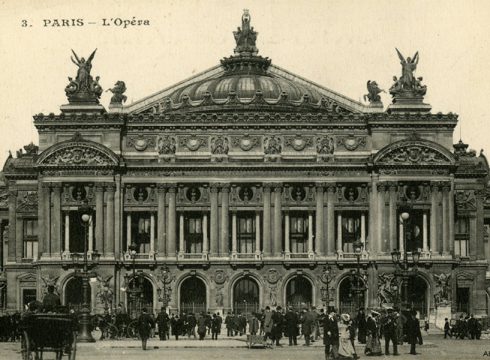 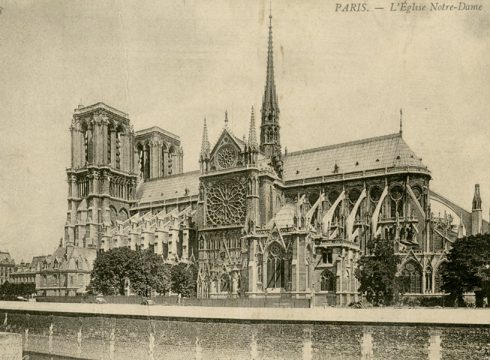 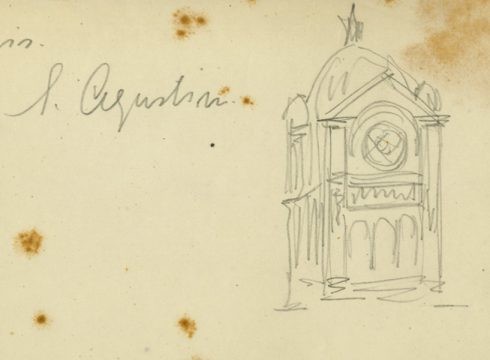 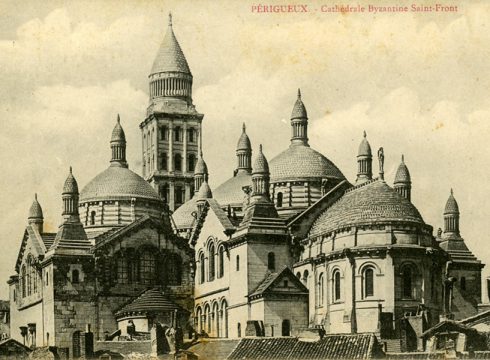 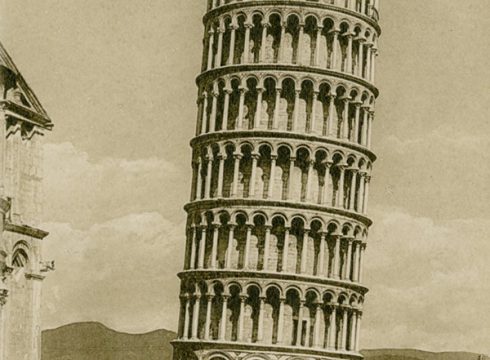 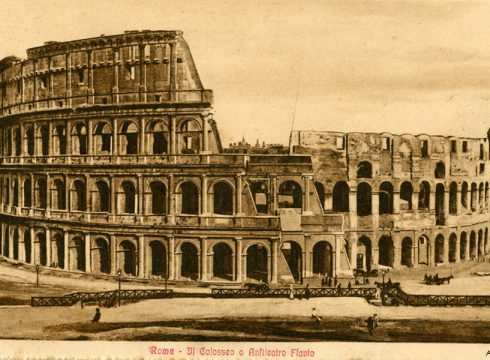 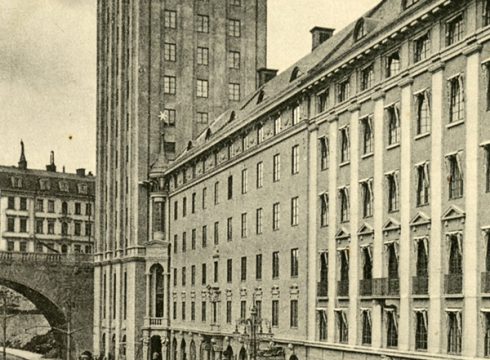 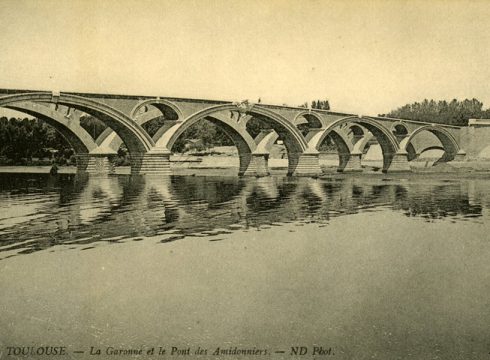 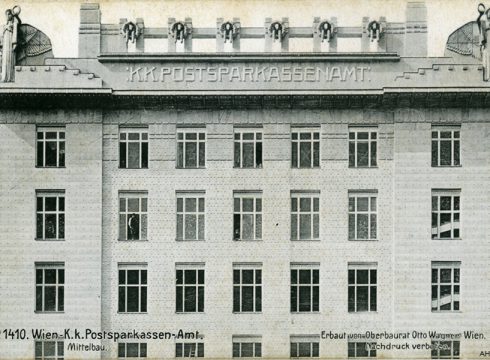 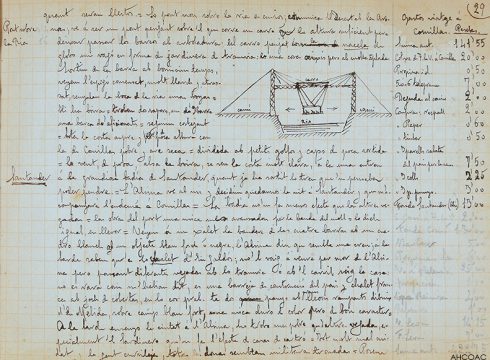 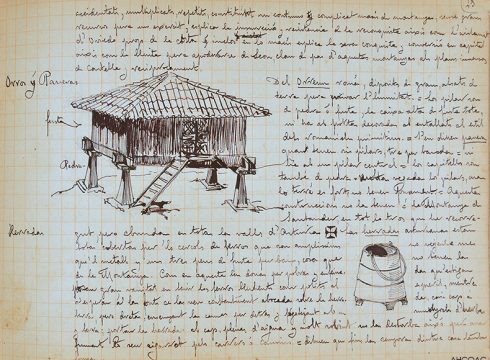 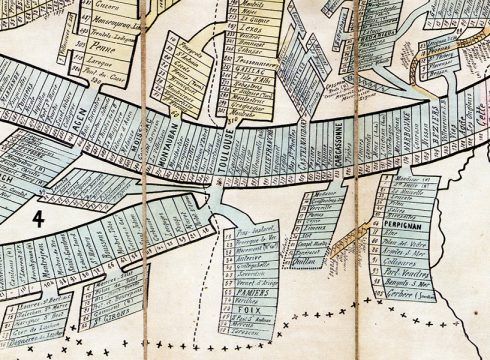 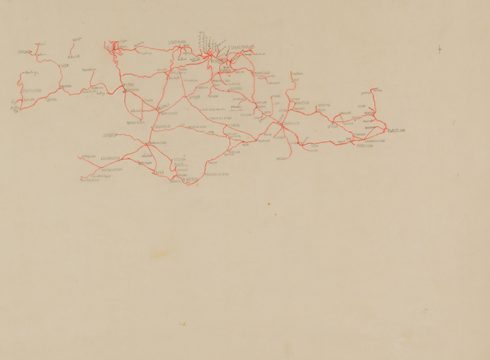 Educational journeys were an important part of architectural training in those years. At a time when there were few channels for the transmission of knowledge, which was chiefly conveyed through books and specialised journals with limited representation methods, travel and direct contact with architecture were sometimes the only option for students to further their knowledge.

The historiography of Domènech speaks of his travels around Europe with his partner and friend Josep Vilaseca, although there is no documentary evidence to prove Domènech made these journeys after completing his studies, which is probably only true in the case of Vilaseca. There is evidence, however, that around the year 1879 both architects travelled to a number of European countries – Switzerland, France, Germany, Austria and Italy – to see buildings of a similar type for their project for Provincial Institutions.

Later on, Domènech would continue to travel for business and pleasure, obtaining first-hand knowledge of historical and contemporary architecture in Spain and Europe. Numerous postcards of these journeys were kept in his archive, and some of them were recorded in his diary. Finally, his journeys to trace the Catalan Romanesque were recorded in his teacher’s notes, along with numerous descriptive cards and high-quality photographic plates.