Miquel Salvadó, proprietor of Fonda Espanya restaurant, asked Domènech to refurbish the establishment located in Barcelona’s Raval district. Salvadó intended to extend and modernise the premises that had been in use since 1859, in order to bring the building up to the standards of the new restaurants that were opening at the turn of the century. The project consisted in renovating the dining rooms and foyer of the restaurant, officially opened in 1900, refurbishing the staircase and installing a lift, adapting the waiting room, the guest dining room, the music room and the drawing room, that were completed in 1903.

Even though the initial idea was to change only the interior decoration, Domènech ended up renovating the entire ground floor, rearranging spaces and knocking down walls, allowing the entrance of natural light. The walls that separated the different rooms were replaced by large metal main beams supported by pilasters with decorated capitals, and a huge glass skylight was built. The various interiors were richly ornamented with great creativity that adapted perfectly to each of the spaces. The decorative motifs reveal the influence of both Naturalism and historicism; especially noteworthy are the mermaids in sgraffito by Ramon Casas in the guest dining room, and the alabaster fireplace by Eusebi Aranau and Pau Gargallo in the drawing room.

In 1903 the work was considered completed, and one year later the restaurant was awarded the distinction of Best Commercial Establishment in the competition organised by Barcelona City Council. Over the years the restaurant has changed owners several times; despite undergoing a number of alterations, however, much of Domènech’s oeuvre still preserves its original use. 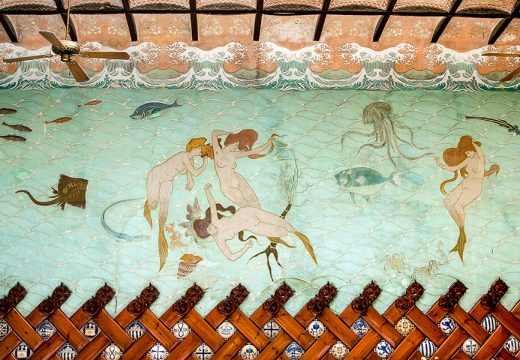 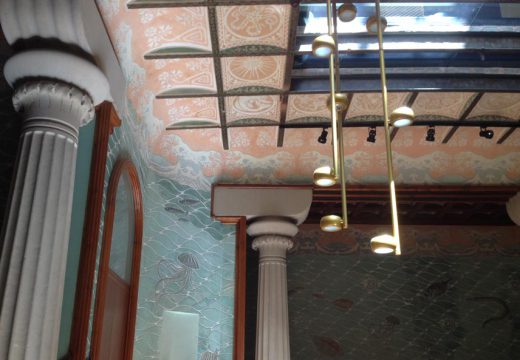