This building was commissioned as a photogravure workshop from Domènech i Montaner by publisher Josep Thomas, a specialist in the most modern techniques of graphic reproduction who often collaborated with the Montaner y Simón publishing house. The structure was erected between the years 1895 and 1898. Later on, in 1902, one of Domènech’s daughters married the publisher’s son, and ten years later Francesc Guàrdia i Vidal, Domènech i Montaner’s son-in-law, designed an extension to the building, which consisted of three further storeys.

The initial design contemplated constructing a semi-basement as a warehouse, a mezzanine for offices and workshops, and a floor destined to be used as a dwelling. The building occupied a plot of land between barrier walls measuring 20 metres in width and 21.5 metres in depth. A large central skylight surrounded by a gallery allowed natural light into the dwelling areas and reached the basement, lighting all the floors. The façade reveals the lower level of stone, made up of the basement and the mezzanine, and a large window with a diminished arch, protected by polychrome stained glass and a wrought-iron grille that allows a great deal of light into the basement. At each side of the façade we find the entrances to the building — the one on the left led to the workshop, and the one on the right to the family dwelling. The upper part of the façade, covered in polychrome ceramics and decorative elements in stone, had a continuous balcony made of stone and a colonnade that reinterpreted the Ionic style and introduced the aesthetics of Naturalism.

Both the façade and the interior were profusely adorned, although the decoration wasn’t mentioned in the plans submitted for building permission. The façade was covered in ceramics made by the Pujol i Bausis firm, with elements that had metallic reflections, and the upper cresting featured stone pinnacles. The two side towers were built in different materials, one of them was made of stone and crowned by a large pinnacle, and the other one had a metal and glass structure and created an asymmetrical effect that brought the façade to life. The grille on the central window and the sign were made by Flinch Locksmiths. The woodwork, exemplified by the exquisite banister that becomes a bench, is by the Viladevall brothers. The stained glass of the skylights and windows on the façade and in the courtyards is by Antoni Rigalt; the mosaics – reminiscent of the Middle Ages and of extremely high quality and beauty – are by Lluís Bru; and the ornamental work in stone is by Alfons Juyol.

The alterations carried out in 1912 introduced three extra floors, yet preserved the harmony of the ensemble, moving the crenellated crown to the upper part of the building. 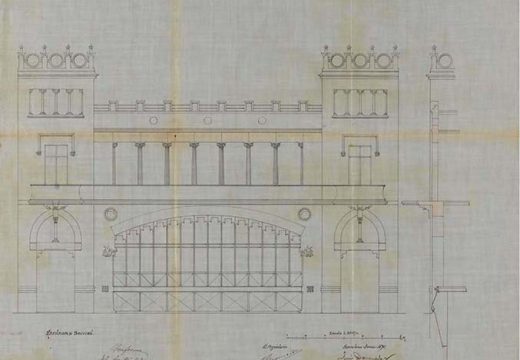 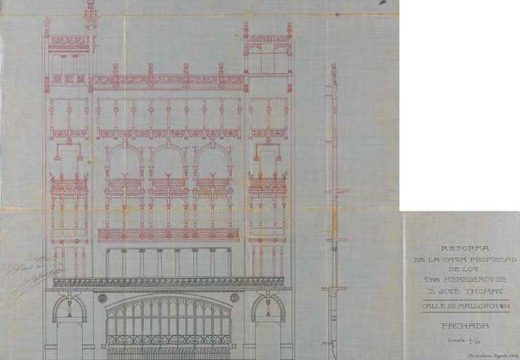