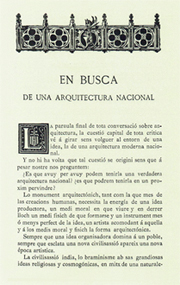 As an individual and as regards the ensemble of his oeuvre, Lluís Domènech i Montaner is a quintessential example of the cultivated, progressive and creative spirit that characterised the late nineteenth century and early twentieth century. His personality was successfully projected within a pluridisciplinary form of social participation. In the sphere of the arts, he was a draughtsman, bookbinder, publisher and historian, and in the realm of politics, he was an activist of catalanisme, the Catalan nationalist movement, and eventually became a member of the Spanish parliament in Madrid. As regards his main discipline, he taught at the Barcelona School of Architecture, where he also occupied the post of director during twenty years. Architecture was the true core of his public life, where he expressed his technical and artistic skills to the full.
Domènech created an original ornamental repertoire around a new structural model – form, function and symbol – that enabled him to work with the best artists and craftsmen. The fruits of this collaboration, present in his designs, reveal one of the most rational and decoratively rich architectural concepts in European history.

Lluís Domènech i Montaner was born in Barcelona on 30 December 1849, in the bosom of an enlightened and wealthy family. He was the fourth of seven children and grew up in Barcelona, spending his summers in his mother’s village, Canet de Mar.

Domènech’s training was pervaded by the same spirit of erudition that characterised his surroundings, from his early days at Galavotti school in Barcelona to his period at university in Barcelona and Madrid where he studied Exact Sciences and Architecture and tried unsuccessfully to obtain a fellowship to the Spanish Academy in Rome.

Domènech i Montaner was very young when he first began to take part in Catalan cultural life, an activity that brought him into contact with the first Catalanist movements. Despite having been one of the chief representatives of political Catalanism and a member of the Spanish parliament in Madrid, his political relevance has waned over time and has been undervalued by new generations of politicians.

Domènech wisely cultivated the art of publishing and the graphic work involved in the printing of fine books in the family business.

Domènech’s relationship with the Barcelona School of Architecture lasted forty-five years, during which he worked first as a teacher and subsequently as director, a position he would occupy for twenty years. His oeuvre had a decisive influence on new generations of professionals trained at the school.

Domènech’s architectural works ranged from urban projects and monumental ensembles to small-scale commissions. The work in his studio was carried out in collaboration with a solid group of technicians, artisans and industrialists, all of whom aspired to create the total work of art.