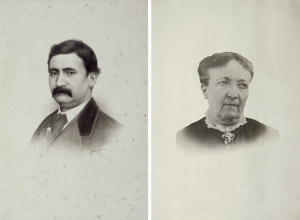 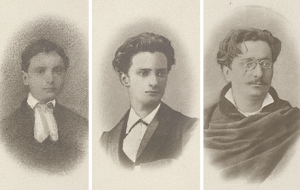 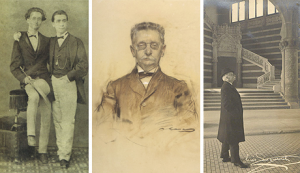 Lluís Domènech i Montaner was born in Barcelona on 30 December 1849, in the bosom of an enlightened and wealthy family that lived at 40, Carrer Ferran. His father, Pere Domènech i Saló, was a prestigious bookbinder from Sant Just Desvern, and his mother, Maria Montaner i Vila, from an ancient and noble family from Canet de Mar. He was the fourth of seven children and grew up in Barcelona, spending his summers in his mother’s village, Canet de Mar.

His father died shortly after he completed his studies at the School of Architecture in Madrid, and in 1874 he returned to Barcelona to help the family bookbinding business. Alternating his literary and artistic publishing projects with his first professional commissions as an architect, during these years his political activism was sparked.

In 1875 he married Maria Roura at St James’s church in Barcelona, where he himself had been christened. The couple would have eight children, three girls and five boys. The firstborn, Lluís, died at the age of eighteen months and the last-born, Ricard, at the age of twenty-three due to a railway accident. His son Pere studied architecture and worked with him on his most important projects, as did his son-in-law Francesc Guàrdia Vial, married to his daughter Dolors. His son Fèlix, a doctor, helped him with his studies in heraldry during the last stage of his life.

In 1875 he joined the Barcelona School of Architecture as assistant professor, an institution with which he would remain associated until 1920.

At the onset of his professional career, Domènech i Montaner formed a partnership with Josep Vilaseca i Casanovas, with whom he had studied at the Madrid School of Architecture. Later on, he set up an individual practice, supported by a team of regular collaborators that included other architects, artists, craftsmen and industrialists of renowned prestige.

His dedication to his trade spanned fifty years, during which he was responsible for a number of important works, while taking an active part in local social and cultural life, and politics.

In the last years of his life, suffering from cancer of the stomach and disillusioned with politics and with a few fellow architects, he entrusted much of his professional activity to his son Pere Domènech i Roura and to his son-in-law Francesc Guàrdia i Vidal, devoting himself to his history and heraldry studies.

His last will was to be buried in the family vault in Canet de Mar, but the political circumstances of the period (the recent dictatorship of Primo de Rivera) prevented a burial and a funeral that would have been an expression of Catalanism. Lluís Domènech i Montaner was buried in a niche at the cemetery of Sant Gervasi in Barcelona, where his remains still lie.